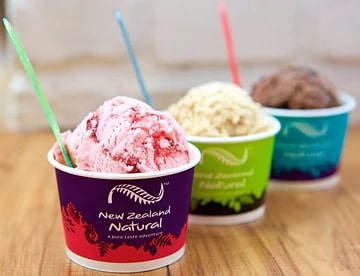 This week I was given the seemingly impossible task of discovering which shop has the best ice cream at Bondi Beach. As a creamery connoisseur, I aimed to leave no sample spoon unsullied. I began my journey at Gelatissimo Bondi, a small shop on Hall Street. In my experience, gelato has always fallen short. I consider it ice cream’s wannabe cousin. However, Gelatissimo Bondi not only proved me wrong, it left me wanting more. They had a wide assortment of flavors: coconut, pistachio, espresso, lemon, among others. I ordered a scoop of chocolate and another of mint chip — my favorite combination. Amazing! Made fresh daily in the store, if you’re a gelato lover, or looking to shatter your preconceptions, pay Gelatissimo Bondi a visit. (3 Hall St, Bondi Beach NSW 2026)

Next up, a cute little shop called Cha Cha’s. I saw the words ice cream and assumed I knew what I was in for. Looking at the varieties, I noticed that each had a unique health benefit. Turmeric flavor features anti-inflammatories; salted caramel is rich in probiotics; hazelnut improves brain and cognition function; strawberry boosts immunity — tons of delicious options that are actually good for you! I chose milk chocolate with fruit — rich in antioxidants and totally amazing!!! As the cashier rang me up, I noticed a sign: Plant Based Ice Cream. I was stunned to discover my cherished dessert was made from cashew milk! No sugar. No dairy. I take my ice cream very seriously. If I had read that sign first, I might never have tried it. But Cha Cha’s is the real deal. Don’t be fooled into thinking a vegan creamery can’t be delicious. Cha Cha’s is definitely worth a try. (156/6 Campbell Parade, Bondi Beach NSW 2026)

Next on my list was an oldy but goody: Ben & Jerry’s. I felt a little piece of home when I stepped into the shop. They had all the classics- Phish Food, Chunky Monkey, Coffee Coffee, BuzzBuzzBuzz, and others. I paced in search of a flavor. Chocolate Therapy. That hit the mark. I went old school and made it a milkshake. Australian shakes are way too watery — like drinking flavored milk — I hoped for a taste of home. Ben and Jerry’s exceeded my expectations: I enjoyed my first thick shake since arriving to Australia. If you’re missing home and in need of a classic American treat, go to Bondi Ben & Jerry’s to get your fix. (138 Campbell Parade, Bondi Beach NSW 2026)

Having met my caloric content for the week, I trudged over to New Zealand Natural. A hole in the wall shop with ice less customers than the prime time stores, I had some trepidation. Boy was I in for a surprise! I went on a sampling binge; cookie dough, green tea, and cookies & cream to name a few. All hit the spot but I stayed conservative and ordered strawberry on a cone. It. Was. Delicious. Creamy, fluffy, just plain yummy . . . I couldn’t get enough of it. I know my strawberry ice cream and am a tough critic, but New Zealand Natural hit a home run. The chunks of fruit were sweet and fresh and ice cream made fresh daily in the store. They had a mix of exotic flavors to compliment the classics. If you’re interested in expanding your experience of what ice cream can be, go to New Zealand Natural — you won’t be disappointed. (1/178 Campbell Parade, Bondi NSW 2026)