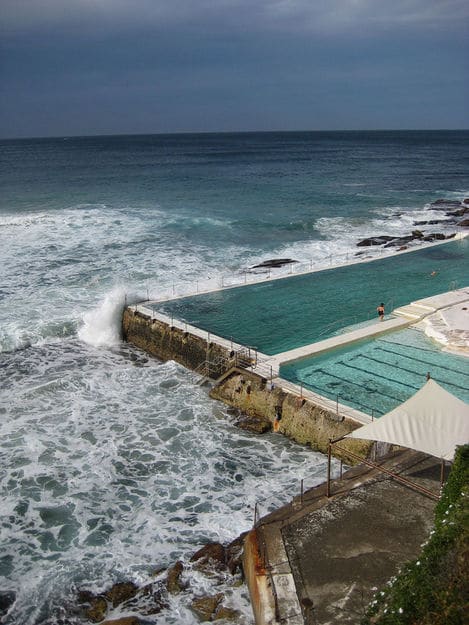 When I think about Australia, I think of the beaches. Even before I came here, all I could think about was hitting the beach- especially Bondi. I had seen pictures of Bondi beach from friends and family that have come here, and in almost all the pictures there was always an amazing turquoise pool somewhere in the view. I didn’t know anything about this pool, but I couldn’t wait to see it in person.

During my first trip to Bondi, the first thing I did was take a walk toward the pool that I had dreamt about seeing. I learned that this iconic pool that was in all the pictures I’d ever seen of Bondi was called ‘The Bondi Icebergs.’ It was even more amazing in person, surrounded by Bondi’s cliffs and the ocean. But, my curiosity for the Bondi Icebergs didn’t end there. I wanted to know more about it, and maybe even get to go swimming in the famous pool.

After doing some research and sitting down with one of the pool’s employees, I found out everything I needed to know about the Bondi Icebergs. It turns out that the pool dates back to 1929 when it started as a swim team. There is still an Icebergs swim team to this day, and it is mandatory that all club members must attend three out of four Sunday meets for five years. Anyone in a five-kilo radius is required to be a member of the pool, though members from all over Sydney are welcome. There are also regular swim lessons that are taught at the pools, as well as occasional weddings and corporate events held at the club.

As for attracting tourists, the pool is open to the public for an entrance fee of $6.50 AUD. There are two pools that guests can swim in, and there is a sauna that is also open for the public. The Icebergs has a bistro in the building that boasts ocean, cliff, pool, and beach views while you eat. Not only that, but the food is just as good as the views.

Despite all this, I still questioned why a tourist might spend a day at the pool instead of just sitting on the beach itself. The employee I spoke with told me that many people that come to swim decide to visit the pools instead of the beach because Bondi is strict about people swimming in the oceans. The currents are too rough to swim in, and since the pool is 100% ocean water and not chlorine, it provides a unique experience and the perfect solution for not being able to swim in the oceans. Not too worry, though, the pools are cleaned every Thursday, so you won’t have to worry about the water getting too dirty. He also said that the pool is open year-round, so even though it gets very chilly, tourists can still come to visit the pool during winter, and even the members will come regularly during the winter despite the cold temperatures.

All in all, the pool is a cool place to visit. It was nice to be able to take a swim, but I wouldn’t spend my whole day here. So, if you go to Bondi but can’t decide on doing the cliff walk or taking a swim, I would personally go for the walk. The pool is a fun thing to do for maybe an hour at most, but you can enjoy the view without paying for the pool. And, once you get down to the pool area, there are no pictures allowed- so you can’t even take advantage of the photo-op. I would most likely spend my day on the beach, then go to the Icebergs bistro for dinner without paying for the pool. But, if you’re set on swimming, the entry fee is low enough that you won’t break the bank. Ultimately it is a personal choice, but if you do decide to go to Bondi, I would at least check out the pool further to see if it is something that you would like to do.