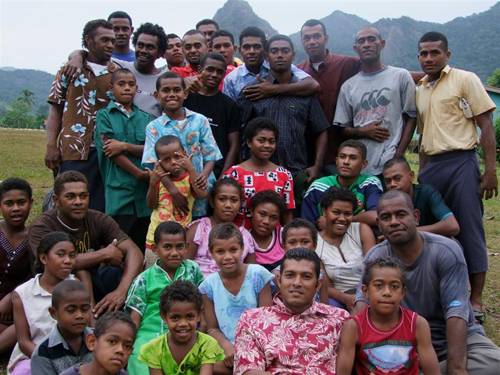 Crossing boundaries in their disparate forms is the single greatest purveyor of wisdom in travel abroad. With each boundary crossed comes a deeper awareness of place. And, sense of place is what separates the traveler from the tourist.

In 2003 I led twelve U.C. Santa Barbara students on a six-week field course to Fiji. As a cultural anthropologist, I was eager to kick off the village stay component. Well-off twenty-something’s would soon be delivered into the belly of a beast: a dark past percolating through a culture’s veins. To put it bluntly, our village hosts were headhunters. Well . . . they used to be. Not in some foggy headman’s memory captured in a fireside story. No, these folks had elders that still recalled the pungent taste of human spleen.

At the local museum, teeth mark on the cracked leather of a missionary’s shoe bespoke a cannibal’s exploration into what was edible on the white pig. No doubt the image had lodged itself like an earwig into student minds as we prepared for our village stay.

We squeezed into public transport as it belched, shook, and ultimately clawed its way up the mountain to Delailasakau Village. The physical boundaries were everywhere: a vacuous river-carved gorge, jaw-dropping rock spires, clouds that rolled over peaks like a tropical serpent. But it was the cultural boundaries yet undiscovered that would prove the most spectacular and humbling.

On either side of the dust-covered windows were villages born of the jungle and fed by the river. After 90 minutes on cracked vinyl we reached the end of the road and the remotest village in the Viti Levu Highlands. Three years earlier a commuter plane had slammed into the bald granite that overlooked their settlement. The villagers of Delailasakau were first on the scene. For a culture of limited material goods, everything had value: including the watches off the dead hands of passengers and some of the plane’s cargo. The negative portrayal of their actions by the media led them to shut off access to the plane’s wreckage and the outsider world for a time.

One by one, students stepped off the bus and took a shaky knee on a billy billy–thatched bamboo raft. Across the river and down a jungle trail stood the village. The swift current served as yet another boundary to be crossed: a transition from the known to the unknown. Fears of becoming human jerky soon dissipated as children emerged en-masse from village huts. Nervous giggles and broken English filled the courtyard as students and youth bonded. After a hearty dinner of homegrown greens and “tin meat,” students were matched to host families. “Bula! I am your father,” a man of fifty with skin that sagged beneath either eye said extending a hand. “Bula! I am your mother,” followed a female voice escorting a student into their new home.

The next day, while the students crossed culinary, social, and physical boundaries with each breath, I headed down to the river to trade the drama of cultural immersion for the respite of simple flowing water. I needed a return to the elements: liquid helium for the spirit. With no thought for the morrow, I plunged headfirst into the stream and wrapped my arms around a stalk of bamboo floating in the river’s center. My spontaneous journey began. With each bend in the river I floated toes to the sky beneath rock faces and a kaleidoscope of colors: blues, greens, and ochre-tinged reds.

I passed streamside villages and the looks of curious children and mothers hanging traditional sarongs to dry. Fertile gardens that could allow a family to survive a lifetime without every setting foot in a town covered the hillsides. Five miles downstream, I pulled myself up on the bank of a nameless village and was promptly invited to share a bowl of kava with the headman.

I returned to the students refreshed and energized by my river journey. That evening, as they played in the courtyard with children and their mother’s cooked sweet potatoes over charcoal, I was summoned into the meeting hall by the village headman. Joined by eight or so elders, I passed the kava from my lips to the man across from me. The tone was noticeably somber. “Dr. David,” the headman spoke tersely, “we have a problem we need to speak to you about.” The eyes of the men drifted off me and onto the kava bowl between us. “Today you went into the river. And you entered the territory of many villages. This has caused us big trouble.”

I sat frozen: snapped back to a reality so obvious; so hidden. In a flash, I realized the implications of what I had done. The river that my Western eyes saw as nature in its most primordial form, transcending boundaries and belonging purely to the hydrologic cycle; this same stretch had been cut into pie pieces by each riverside village, a territorial cast net thrown from shoreline to shoreline. “The man you drank kava with downstream,” the headman explained, “he is one of our longtime enemies. You must understand: you are like our children. We must take care of you.”

I cringed as the trickle of blood feuds seeped into consciousness. Never had I felt as uncultured and awkward: the ugly American with duck feet. Following the meeting, I walked eyes to the earth back to the river. Where I once saw nature, I now saw liquid culture for as far as the eyes could see. Boundaries. Everywhere human boundaries.