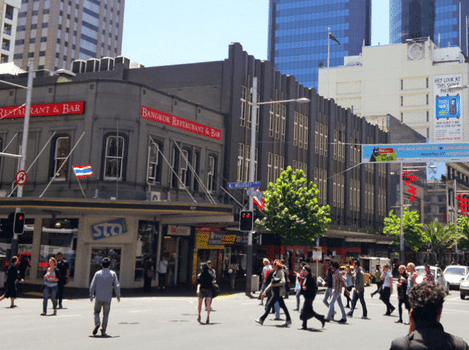 Today I went on a search to find a good spot for lunch under 16 NZD. I headed down to queen street from my apartment. On my way there, I passed by several places that looked good and had good deals as well, such as Ponsonby Central Markets, a food court on Ponsonby road which serves Thai, Barbecue, Japanese Malaysian as well as smoothies. St Pierre’s sushi on Queen Street has a variety of sushi rolls premade to go for 12 NZD each. I ended up eating at Al’s Deli on Queen Street. They have a nice array of options on their menu. From handmade bagels and breakfast sandwiches to burgers. All of the deli sandwiches were under 20 NZD as well as a few of the burgers are all under 16 NZD. I ordered the veggie burger which was made from corn and quinoa and was topped with an tangy asian slaw and a peanut sauce as well as lettuce and tomatoes. I enjoyed it very much. The manager told me that it is hard to say they have a “specialty” because they have such a large selection and it really depends on the person. Although the veggie burger is probably what is ordered the most along with the fried chicken sandwich, which also caught my eye when I was ordering He also said that during the week they are typically busy during lunch and weekends during breakfast. He said people tend to order differently depending on the weather, for instance people will order healthier lighter options on sunny days and more comforting foods such as burgers and fries on rainy days. The atmosphere of the restaurant is very laid back and comfortable and I found this nice considering it was a very rainy day. Most things are made from scratch. They have options for everyone as well as affordable options and are open pretty much all day from 7am to 10pm.