*Disclosure: Because this experience was so powerful and pivotal in my own interpretation of my time in New Zealand, I thought it would be best to have a couple blog posts to explain the Milford Track. See my next post for my true thoughts and feelings on what can only be described as a truly transcendent journey.*

When traveling all the way to New Zealand (it really is far from any other part of the world), it is imperative to visit the South Island. While the North Island has beautiful places to visit like the Bay of Islands, Rotorua, Taupo, and Tongariro, there is true majestic beauty in the South Island, and in particular in Fiordland National Park.

About two weeks ago, I decided to hike the Milford Track, a 55 kilometer (35 mile) 5 day track along the Clinton River and over the McKinnon Pass in Fiordland National Park. It is one of the nine “Great Walks” in New Zealand. The hike can be done through Ultimate Hikes New Zealand, which is a guided walks company that provides guides, meals, and lodging for a group of about 50 walkers at a time, or it can be done independently, which requires walkers to bring their own food while staying in the Department of Conservation (DOC) huts. I chose to walk the Milford Track through Ultimate Hikes, which made the experience much more enjoyable.

From Auckland, I flew to Queenstown the day before the walk started. The next morning, the group took a coach two and half hours to Te Anau, from which we took an hour long boat ride to the head of the trail. After about one mile of walking we arrived at the first lodge, and then went for a short nature walk to see the surrounding area. Day one certainly did not count as a day of walking.

The next three days were all filled with hiking. Day two consisted of 10 miles of walking, but on mostly flat terrain, making it retrospectively the easiest day. Day three was certainly the hardest day; it was nine miles of walking, but the first half was uphill—about three hours for the fast group at the front—and then a grueling and painstakingly slow descent that also took about three hours in the afternoon. Day four was the final day of walking and was the longest at 13 ½ miles. It was mostly flat with a few inclines. Day five included no walking, just an hour long cruise around the Milford Sound and a four hour coach ride back to Queenstown.

The Fiordland National Park has been well known to the Maori for many centuries, but was never a permanent settlement due to its rugged landscape. In 1773, Captain Cook and his team were the first Europeans to visit the area and spent five weeks in Dusky Sound. However, not until the late 19th century did people truly begin to visit the area. Quintin McKinnon and Donald Sutherland created the Milford Track in 1889 and were the original guides in the area. McKinnon was such a pioneer that the high point of the Milford Track, the McKinnon Pass, was named after him. It is assumed he died in Lake Te Anau while on his way to Milford Track, yet the exact events that caused his death are unknown—his body was never found, just the remnants of his boat. 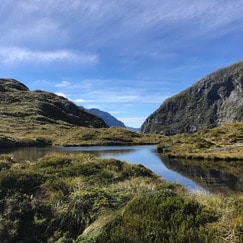 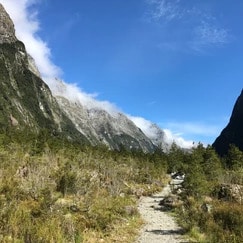 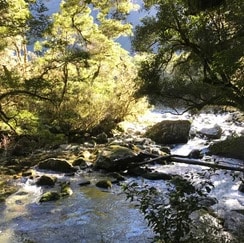