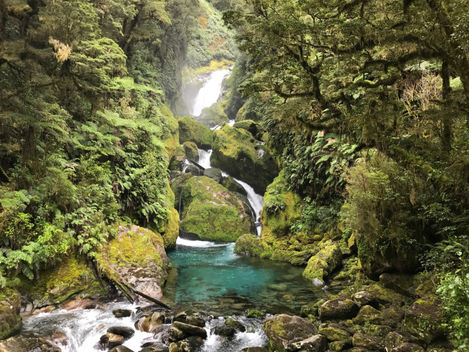 The most difficult aspect to the Milford Track experience was the silence, the silence that felt peaceful at times, but eventually became inescapable. By the end of the trip, I began to think of that silence not as just pure “silence,” but as the sound of silence. The nothingness in the air became something that, in a sense, was actually quite loud and overwhelming.

There is a sound to silence. Indeed, it wasn’t completely silent on the track; there was wind slipping through the leaves of the trees, water running in streams, and the ground crunching under my feet. But those sounds can only be described as decorative elements to the greater music of the silence that overtook the space that I was in. The sound of silence was intoxicating and created a pulsation through the body and the earth that felt as if it rhythmically aligned me with the pulse of the earth. Suddenly my mind slowed and there was a sense of unity to both myself and the earth, held together by the nothingness of the air around me.

Out of the context of such an untouched, pure, and natural place, the idea of silence having a sound and it being able to align you with the pulsations of the earth seems overstretched and dramatic. But it is true. The sound of silence gave a feeling of completion and certainty to myself, even though I often felt overwhelmed by the majesty and inaccessibility of the natural world around me. Being in complete silence created a feeling of equality between the vast, powerful, and beautiful world and my insignificant and small being.

There is also a necessary feeling of pilgrimage that comes from this sound of silence that can only really be experienced in that natural and lonely context. The pilgrimage was not to a physical place, but the sound of silence allowed me to think about the journey of life and to question whether it is forward moving in one general incline (or maybe even decline) towards death, or if life is instead made up of many smaller pilgrimages, little ascents and descents, that make each one after more and more powerful.

With my experience on the Milford Track, I am encouraged to say that life is a series of pilgrimages that hopefully make up one larger pilgrimage toward enlightenment or sense of inner acceptance on the condition of being human. The Milford Track for me was a pilgrimage about honoring the fleeting nature of my existence on earth, and the natural beauty around me that is at my disposal to enjoy. This pilgrimage taught me that there must, indeed, be something greater to life on earth for it to be this magical both visually and spiritually. Nature may seem silent and lifeless, but, in fact, it is teeming with a vibrancy that will outlive each of us, and if offered the chance, it is our responsibility to find unity with it, even if brief. 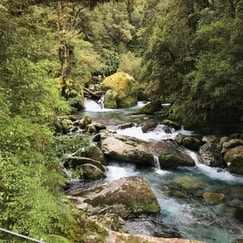 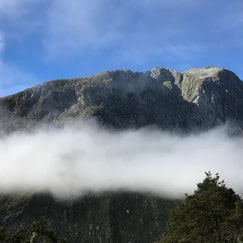 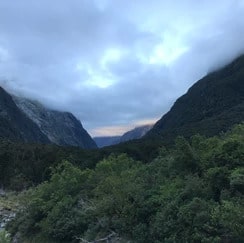