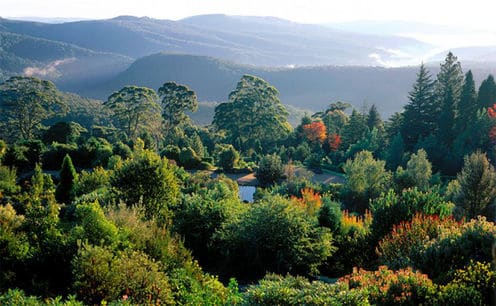 You can’t spend much time driving through the Blue Mountains or Australian countryside without wondering about how people survived in this rugged terrain before cars, restaurants, and roads. My grandpa connected me, Taylor, Olivia, and Anna to his friends, Richard and Sue, who live in Sydney and have a house three hours into the countryside.

As we entered the rugged mountain terrain on the drive to their farm house, Richard pulled over the car to show us the beautiful and drastic cannons. It almost looked animated. Richard told us so many facts that we would not have stumbled upon if hadn’t taken their invitation to their family farm they call, “Melrose.” As we admired the huge canyons he told us that it took fifteen years for British settlers to get past the cliffs we were gazing upon. They simply couldn’t figure out how to get past the sharp drop-offs. This was surprising as there are small towns and settlements beyond those points now. I couldn’t imagine living in Sydney for fifteen years and never knowing what was beyond those cliffs. He said the British continually got stuck at this point and return home discouraged. It wasn’t until the local Aborigines showed them how to navigate and respect the land, that they finally traversed. There were many other stories and facts like this shared on our three hour journey, and each of them equally amazing. For instance, Richard told us that Aborigines showed the settlers how to burn the bottoms of trees to help them survive and defend against future bushfires and eventually regrow. These connections and “hacks” to the land came from people who truly understood it.

The Aboriginal tribe in the area we were in (before it was a coal mining town now called Lithgow) was the Gundungurra. The land they covered is vast, full of different terrain: mountains, cliffs, rivers, valleys, and grassland. As Richard took me on a drive through their “paddocks” (what we call pastures in the US) in a small red tractor, he showed me some funny looking grass.

“It looks like wheat, doesn’t it?” He asked me this while pulling a handful of stringy looking brown grass from the earth. Not even knowing what wheat looks like I said, “sure!”

He explained that the Gundungurra had discovered that in the roots of this grass were small seed-pockets filled with protein. Wow. I thought about how I dig through plastic nutrition labels to find protein content, yet somehow the Gundungurra people found it through trial and error with this land.

Richard also told me another remarkable story about childbirth and mud (an unlikely combination). Many Aboriginal tribes had discovered that after mothers lost blood in childbirth a certain kind of mud replenished their iron deficiency. I do realize that the Gondugurra people might not have called the energy they found in the grass seeds“protein”, or the mineral in the mud “iron”. However, the amazement still holds when realizing how intricately this culture understood such vast and varying domain.

I feel so fortunate to have really seen some nature outside of tourist pasts in Australia. There are so many things to appreciate about the land and that goes hand in hand with appreciating the culture and survival of the Aboriginal peoples.