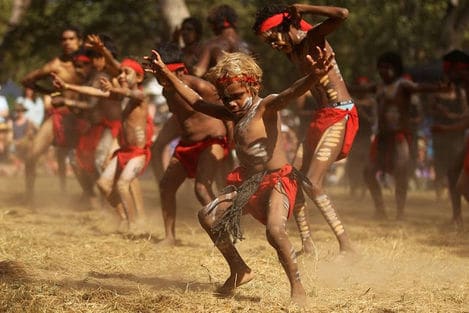 The only way I can try to explain the Aboriginal concept of “Dreamtime” is to share my experience learning about it. It is so different than western ideology that learning about the beliefs while in Sydney, an advanced and westernized city, makes it even more confusing. Dreamtime consists of many parts of Aboriginal life including, the “lore” (somewhat equivalent to our law) and an explanation of our world’s creation and existence. The “Dreaming” is what the time before the world and ancestors were created was called. Obviously Dreamtime covers too much to discuss in a short article, but I do want to focus on the parts of this concept/culture that struck me the most.

In our recent trip to the Blue Mountains we spoke to an Aboriginal briefly and observed traditional Dreamtime dances and rituals. Being completely honest, if the culture and reason for the dances is not explained first, they can seem confusing and overwhelming. From an outsider’s point of view they look like reenactment of wild animal noises and movements. However, they are so much more than that. The deep understanding the Aboriginals have for animals behavior is rooted in their respect for their prey. Like we did, they hunted animals for their food, however, this idea of respect is where we differ greatly. While they still killed and ate their prey, they respected the animal both in life and in death. Killing does not equal conquering to them as no human is worth more to the land’s existence than even the most tiniest animal, one that we would call insignificant. Sayings “It’s just a fly” do not exist in their culture. I think that is both the most confusing part of the culture and the most fascinating.

The Aboriginal we spoke with at the Blue Mountains explained to us that the word “mine” did not exist in any of the 300 languages belonging to Aboriginal tribes. That’s a small fact that explains so much about the successful coexistence of over 500 clans speaking different languages in Australia before the British arrived.

It’s really hard to understand such a different culture. It’s also hard not to feel sad when learning about how long and how peacefully this way of life existed, and how quickly it ended. I am learning about a culture that is unconditionally intertwined with Mother Earth and wild animals while sitting in a major city, speaking a language that over uses possessive words like, “mine.”