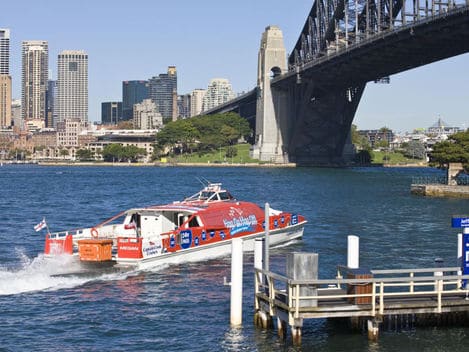 On one of our first days exploring together, Will, Oren, Olivia and I decided to go to Manly via a ferry that left from Circular Quay which is right in the center of the downtown Sydney coast. It was much cheaper than a taxi and felt faster than bus. For only five dollars we got to see: the Opera House, the Harbour Bridge, and the North and South side of the City all from the water. The views were breathtaking and offered a cool new view of major sites we had already seen from land. We all remarked on how much bigger the Opera house seemed from a distance. Being on the water was relaxing, refreshing, and really gorgeous. Olivia remarked on the color of the water which seems unique to Sydney. We saw small and big sailboats up close and felt more in touch with the Sydney nautical culture. This is really the way to go when traveling to and from Manly because it was relatively fast, scenic, and gave us a good sense of our surroundings and directions. I was really impressed by the small islands and coastal geography of the Harbour area. With a broader view of the city I was able to get a better sense of the layout of Sydney. The Eastern Suburbs became more distinct as did the differences between North Sydney and the CBD. The Eastern Suburbs reminded me of San Francisco, with colorful buildings all close together on a hill spilling into the ocean. My sister has lived in San Francisco for a couple years, and the ferry ride was not the first time I noticed a similarity in the two cities. North Sydney looked more natural compared to the metropolitan CBD. All three sections were beautiful especially contrasted against each other. While I am happy we have already experienced the ferry ride I wish we did it sooner because not only was it beautiful but it gave me a much better sense of Sydney in general.