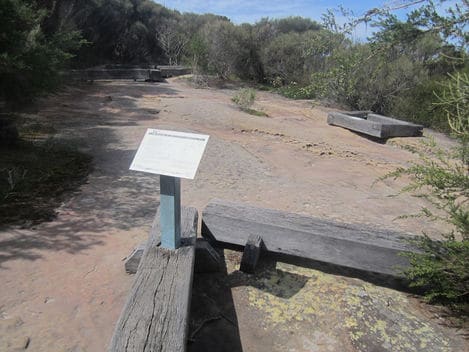 Despite my intense phobia of snakes and some other sneaky animals in wildlife, I decided to walk through the beautiful trail leading to Grotto Point to see some Aboriginal Engravings. First of all, the view from the trailhead was spectacular. I felt like I was looking across the Harbour at the Eastern Suburbs from a cloud. The trail is well maintained and it only took me about five minutes to find the engravings.

The engravings are not colorful and loud artwork but rather very simple marks that almost felt like evidence. They are outlined symbols of fish, water, and land. At this point, they are so faint I wonder if I would even notice them without the signs. However, this doesn’t make them any less impressive.

Seeing these marks was really powerful because it was physical proof of how long and how the Aboriginal people survived here before settlement. As I looked at the engravings after walking down a nicely constructed path, afraid of snakes, and with a smartphone in hand I felt like I was time traveling. I could call an uber and run up the hill, back into the city in fifteen minutes, but for that second I was just in the land, the same land that they had been on for 40,000 years.

What made that experience particularly shocking was the contrast it had with my trip to the Australian Musuem of Contemporary Art that afternoon. Pristine white walls with obscure pieces (one exhibit was a video of people laughing with large birthday hats on) compared to something as simple and natural as this was truly culture shock. To make the day even more connected, one of the last exhibits I visited in the MCA was a memorial to Aboriginal victims of racism and discrimination. I was overwhelmed but more importantly I appreciated so much more the culture that is hidden to the average tourist. I am so lucky I stumbled on this subject and got to have a glimpse at 40,000 years of history during my short time here.